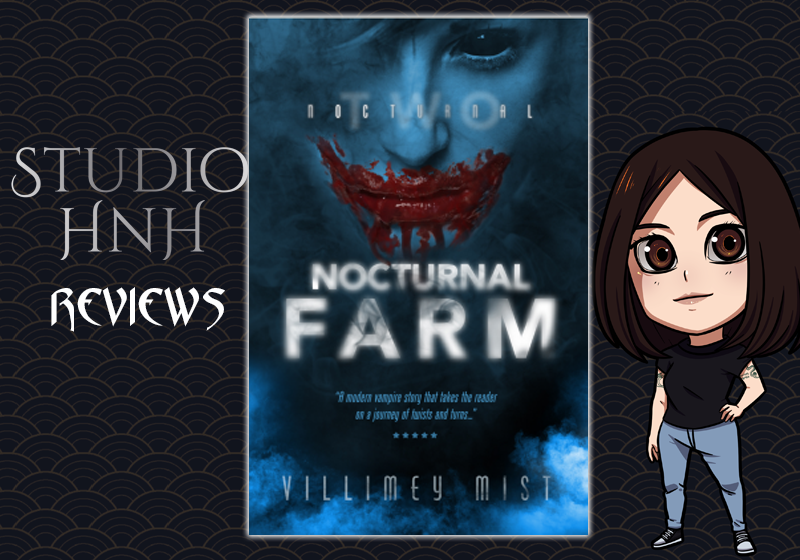 Six months ago, Leia’s best friend and half sister died in what she said was a car accident. But the trauma of what really happened has left her anxious and with PTSD. She distrusts the world because the truth, that Vampires are real and anyone could be working for them. Therapy, medication, and settling into a routine has helped Leia find some stability back at home in Anchorage, Alaska.

But her brush with the vampire world has turned into an obsession as she tries to discover and unravel more of the secret society that her sister was a part of. All over Europe large numbers of humans are being reported missing and Leia suspects that there are more villainous vampires taking them.

When Leia’s brother disappears on a school trip to Amsterdam, Leia suspects the worse. Vampires have taken her brother and she will stop at nothing to get him back, even calling on a favor from Vampires.

Nocturnal Farm is the 2nd installment of Leia Walker’s adventures in vampire land. I read the novel without knowing that it was a sequel so the early chapters covered the consequences of the traumatic events that happened in Nocturnal Blood.  I found Leia’s obsession with the vampire society that her sister was a part of an interesting way to deal with the trauma of being her sister die. I enjoyed her interactions with her vampire guardians. I also found that her interactions with her parents was rather realistic. They are trying to be involved with their children and are understandably, protective of both of their children since Leia took off and almost died six months earlier.

The story is told entirely from Leia’s perspective so it helps to keep the story focused as we navigate through the set-up for the inciting incident. Mist’s pacing is good and Leia is relatable. She’s a young woman that has survived something horrible and is trying to regain control of what she can. She’s proud but does acknowledge that she needs outside help.

I found it refreshing that she wasn’t doing all of this occult research to become a vampire hunter nor was she trying to be a vampire hunter, uh, hunter. She was doing it to get some peace of mind for herself. She does go to the gym to get into better shape and learn self-defense, and she learns how to shoot a gun but it’s all reasonable. She takes a class, or practices shooting with her dad. She’s not a super badass, she’s a person trying to make herself better equipped for a world that is possibly meaning to victimize her. It makes sense to want to run faster or fight when people have made an attempt on your life.

I’m not sure how long this series with Leia is going to be since, in reading the author’s comments she was saying that Nocturnal Blood was meant to be a stand alone novel so she never intended to write more about Leia. With how well Nocturnal Farm turned out, I hope to see this series progress so we can continue to see this character grows as a response to the events around her.

This is a great read for anyone looking for a more realistic female heroine rise up in the vampire genre. I’m excited to see how Leia continues to evolve. My thanks to Villimey for sharing her novel with me. I look forward to reading more from her in the future.