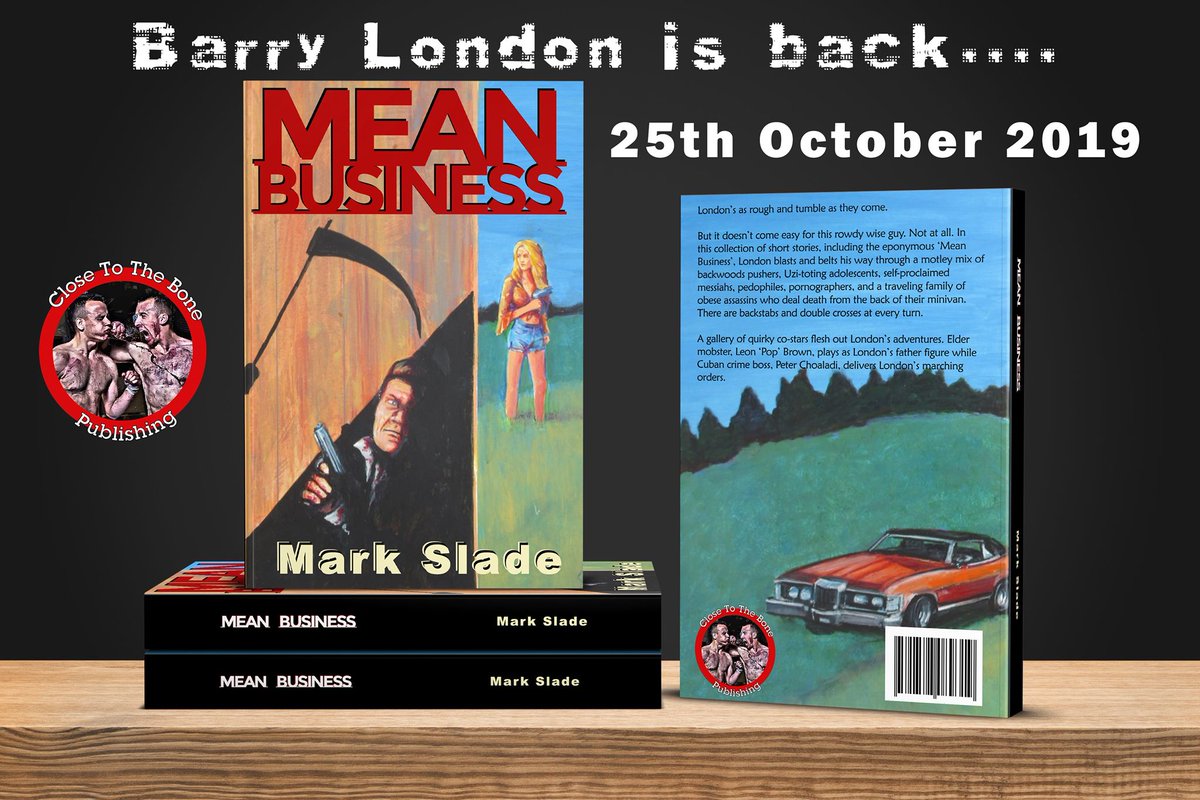 Publisher: Close to the Bone

When I think of noir, I think of dark brooding rooms, a handsome hard boiled detective in a suit and a fedora saving well dressed angelic damsels in distress (that are really femme fatales). Barry London of Mean Business may not have a lot of damsels to save but he has lots of people to kill.

Mean Business is a collection f 6 short stories centered around the misadventures of its protagonist, Barry London. The segments are as long as they need to be and the pacing is rapid fire. Told in third person, the narrative was engaging throughout the collection. In the last three stories, we get to focus on a couple of other characters to expand out Slade’s gritty world. Overall, it feels like London’s stories don’t end when the words crash into a blank page. It feels like the story continues on without us but we don’t have a need to know.

As a general rule, I try to keep my reviews spoilers free. So I will generally talk about each of the stories.

London has been dispatched by his boss, Choaladi to find the kidnapped gangster, Haze Delegaura. He begins his search with his ex-girlfriend, actress,  Mya Stone. He find Mya in her bathroom naked, sticky and has murdered the cult leader, Enigma, floating face down in her bathtub. Not only does he have to find Haze, now he has to get rid of a body. But things only get more complicated….

This story was a lot of fun! It quickly set the tone for the rest of the collection. I love Dashiell Hammett’s Maltese Falcon but crime noir published in the 1930s is incredibly chaste.

“What else is new? London thought. But what the hell was he smiling about? Unless that was the sort of game the two of them played. Obviously they had sex. Semen was drying on Mya’s small breasts.”

This is most certainly not my grandfather’s noir! London reminds me of a mob version of Sam Spade. He’s all business interacting with beautiful, Mya, who is eager and naked. This moved rather quick, no section of the story feels like it went on too long.

Out in the boondocks of Georgia, London is thrown in the middle of a feud between two hillbilly families. The Havers family has reached out to Choaladi to rescue his kidnapped son, Rook and London is the man to get results.

I loved this little bar fight and the exchange between London and the men he’s fighting. One of my favorite lines from this part was, “Barge grunted. His mouth worked overtime on a ball of chaw. He leaned to the side and spat out a long line of brown and black phlegm that wrapped itself around a stripper’s pole.“

Poor London can’t catch a break with his ’73 Cougar. Some crazy people jumped him, robbed him and stole his car. He has to get hold of his boss and let him know things aren’t going according to plan and those bodies…

This story was interesting since we don’t immediately know what happened to London, where he really is or what he’s supposed to do. We start with a scene at the middle and roll backwards to get the full story in pieces to solve the mystery of who stole his car and left a bloody mess.

Shafer Work focuses more on Shafer than on London. The pacing is fairly steady as we meet Shafer and the London crew. I am interested in reading more about Shafer so I hope he is a reoccurring character..

‘The Smelch Bear’ is a reflective story about a pair of war torn lovers that let’s London enjoy a beer as he listens to a homeless man’s bar story. Of course, he had to get chased down an alley and shot first.

The Smelch Bear felt slightly out of place when the homeless man’s story started but it made more sense as the story it came to a close. I was glad that London got a small reprieve from all of the madness of his adventures.

Quarry needs to punish the bad men for the evil committed on his sister, Tess. London has to go to a warehouse to retrieve money and return a book to another associate.

Death Letter Blues switches between Quarry and London as the events progress and intersect. I was really expecting the story to continue but then… I was out of book.

Mean Business was a fun read! I didn’t realize that modern noir like this existed. All of the dark atmosphere of the noir I grew up with but seeped in blood and… other bodily fluids. I look forward to reading more from Mark Slade.

Thank you, Close to the Bone for giving me an ARC of this book to review.